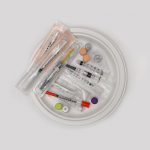 “Just Relax” refers to the most common advice given to people struggling with conceiving by well-meaning friends and family who frequently have no idea of the realities surrounding infertility and pregnancy loss. The reality is that 10-15% of the population suffers from infertility, and approximately 25% of all pregnancies end in miscarriage or stillbirth. Despite these high numbers, it is still a highly taboo topic. The lack of discourse on infertility and pregnancy loss has sustained an atmosphere of isolation and embarrassment for people experiencing these issues.

Stimming Plate and Stimming Stomach show the realities of the IVF stimming process. Stimming is the shortened colloquial word used in place of ovary stimulation during in-vitro fertilization. The plate shows one evening’s injection items collected prior to filling and assembling the syringes/needles. The stomach shows some of the bruising and bleeding that occurs during the stimming process.

Baby’s First Photo: Embryo Adoption is a symbol of the team of parents who work together to bring these babies into the world. Babies born through embryo adoption are often termed “snow babies” since they are adopted as embryos in a cryogenic state. Parents who are unable to create their own eggs or sperm but otherwise have a healthy uterus can choose to adopt embryos from parents who are finished building their families but still have embryos left. This is a much cheaper option than traditional IVF using donors, but it’s rarely advertised by fertility centers as a viable option to family building.

Surgery #5 is the fifth of six surgeries I have endured between 2015 and 2017 in relation to Stage IV Endometriosis, the reason behind my particular infertility issues. Embryo Transfer is a photograph I took under sedation during my embryo transfer in 2017. Final Goodbye is a self-portrait I made embracing my abdomen just before the Dilation and Curettage of our daughter after a missed miscarriage (the fetus no longer had a heartbeat at our ultrasound). All of these photos were made in the moment using my cellphone.