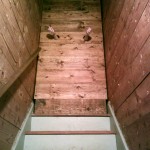 prospective: looking towards the future.

place: a particular portion of space, whether of definite or indefinite extent.

Last night I had one of the most surreal experiences at Skydive Art Space. As part of their The Future is NOW! Fundraiser, I performed a new piece titled A Prospective Place (lovingly and competently titled by the platonic love of my life, Shane Platt). Rosine Kouament and Emily Peacock took turns washing (for ritual sake) and disinfecting (for hygienic sake) people’s hands and giving them the rules of the experience while I patiently and blindly waited at the top of a stairwell for the next person to enter.

What were the rules?

You must wash your hands, only one person at a time, and you can stay as long as you wish.

With the exception of a few people who talked to me, I had no clue who anyone was. I had originally intended to include a camera up top so that I could see people approach, but I am so glad I did not. Having no camera gave me the opportunity to experience an intimate moment one-on-one with many people, no strings attached, no identities revealed (well, besides mine). It gave people an opportunity to be open and free with themselves and me. Some people massaged my hands, others poked and slapped them, but many caressed and held them (with a few who did some very arousing things that honestly blew my mind!). I am so curious how people’s experiences were from the other side. They had the power in this situation. They had the choice to touch and how to touch. I did not give myself those choices. Whoever reached out to me, I responded.

Anyhow, thank you to everyone who came out to support Skydive Art Space and I hope you had a splendid evening!