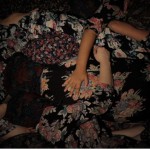 Dawning coordinating floral garments and hoods, a mass of intertwining women cuddle and cling to one another between bursts of snaking movements and en masse vibrations. A single light source exposes their actions like a clew of wriggling earthworms pulled from the ground. As the women maneuver over and under one another, their dresses transform into an undulating kaleidoscope of flowers and body parts.

For centuries, flowers have stood as a universal sign of femininity, prospering during the 19th century through a sub-genre of painting known as “floral-female”. These women were delicate and graceful, but also non-confrontational and indistinguishable. Similar to their inspiration, the masked women in Flower Garden relinquish power and dominance in exchange for an alluring loss of individuality.